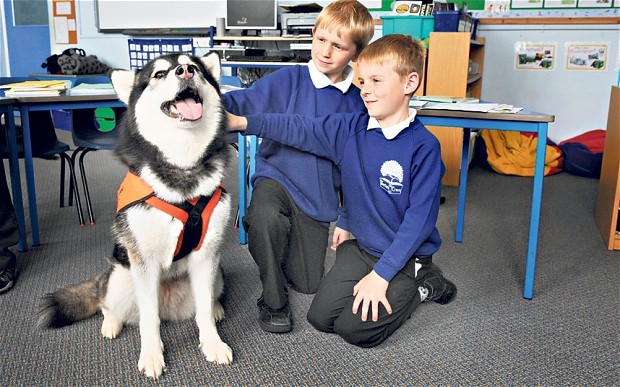 At a primary school in Devon, a class of eight year-olds is finishing a literacy exercise. It’s a scene familiar to hundreds of classrooms, except that lying quietly in one corner is Wynona, an Alaskan malamute.
Wynona was trained by Tracey Berridge, a canine behaviourist trainer, who set up Dogs Helping Kids in 2003 to take dogs into classrooms, both as therapeutic aids for teaching children about kindness and empathy, and also for providing reading support.
Stretched out on her blanket, Wynona’s calming presence is almost tangible as the children work near her, occasionally looking up to smile at their canine classroom assistant, before returning to their writing.

Inspired by a documentary she saw as a teenager about the positive influence of dogs on education, Tracey, 41, is dedicated to taking dogs into schools. It’s a timely move. National literacy is under scrutiny, with figures suggesting one in six pupils struggle to read fluently by the age of 11. Nick Gibb, the Schools Minister, has said existing targets and reading lists are too “modest”.
Tracey is hoping to help as many children as possible reach more ambitious literacy goals with her dogs. Her work is voluntary, as is the assistance of the owners, and although she’s based in Devon, she’s also training dogs in Wales, Lincoln and Stafford.   “I’d love to see a working dog in every school,” she says.

The dogs take 18 months to train, and are chosen for their temperament from her puppy training classes. They are either “visiting dogs”, owned by individuals willing to visit schools regularly, “attending dogs”, owned by teaching staff, or “educational dogs”, taken into schools to help teach specific skills, such as literacy. They include Winston, a West Highland terrier working in Yeo Valley and owned by head Jan Reid; Teazel, a talented “labradoodle” (labrador/poodle cross) working at Southmead School in Braunton; and Dexter, a “shoodle” (Shih Tzu/poodle cross), who works in Pathfields Special School near Barnstaple.

Tracey has worked in nearly 50 schools, and with library reading groups, but started the charity after being invited by a teenage behavioural unit to take her own dog, a lurcher cross called Princess Laya, to work with violent adolescents. “Spending time with Laya improved self-esteem and confidence, which had a remarkable effect on behaviour. It inspired me to continue, even though people thought I was loony when I talked about taking dogs into schools in the Nineties.”

Determined to avoid accusations of being too “touchy feely”, Tracey brought academic rigour to the process, completing an MA in companion animal behaviour counselling from Southampton. She frequently references academic research about the effects of dogs on learning, including a paper from Tufts University and Cummings School of Veterinary Medicine, which suggests the dogs provided “comfort and support to participants without judging them”, with evidence a child’s blood pressure and stress levels would lower when asked to read aloud to a dog.

“Instilling positive behaviour at age seven to eight, when children start questioning patterns of behaviour, has a knock-on effect later,” says Tracey. “Dogs teach children about responsibility and respect, while motivating those struggling with poor attention.”

And because children love seeing the dogs, their presence has helped cut truancy. Children are also less likely to shout when thedog is present.

Doug Campbell , deputy head of Forches Cross Primary School in Barnstaple, has witnessed a change in his pupils since Berridge started bringing in Wynona: “We’re in an area with high social and educational needs, and attendance is a problem. The calming effect of Wynona is encouraging, as she seems to motivate and incentivise.”

The “listening canines” are trained to focus on a book a child is reading, and children are told they are teaching the dog to read. “The children feel in control, and it makes reading fun again.”
The dogs are also taught a trick of “reading” flash cards with words such as “paw”, “wag” or “sit”, which motivates children to read themselves.

“Children’s concentration improves when a dog is there,” says Sharon Dixon, the supervisor at Barnstaple Library, who is introducing book groups with Tracey’s dogs. “The fact it won’t laugh or criticise if they’re struggling is really important.”
Back in the classroom, Wynona waits for a signal that the lesson is over. The children all want to know when she will be back. “They feel they have a really supportive ally with them,” says Tracey.